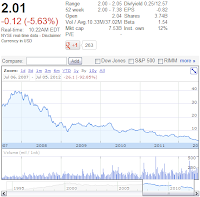 On February 11, 2011 a partnership between Nokia and Microsoft was announced.
The investors felt that this was not going to work for Nokia. Nokia needed to boost smartphone sales, a lot and fast. Windows Phone was too far away to accomplish both "a lot" and "fast". Share prices dropped that same day to $9.36, and kept dropping.
On June 18, 2012 Microsoft made a "major" announcement. Basically it announced more bad news for Nokia: Microsoft will produce their own hardware for tablets. This means that Nokia can't expect a privileged position for selling Windows RT/8 based tablets.
A couple of days later came the burial ceremony: current smartphones using Windows Phone 7 (including updated versions) can't be upgraded to Windows Phone 8. This means that many consumers will not buy Nokia Lumia smartphones, as they will be waiting for Windows Phone 8 capable smartphones.
If about a year ago investors felt the Microsoft partnership to be a bad omen for Nokia, now everyone knows.
And Microsoft shot its own toe. Windows Phone is not selling, and it will sell even less when Nokia is gone. The Microsoft alternatives are to drop Windows Phone, or to produce their own phones. This latter one could mean that Microsoft would have to buy Nokia before anyone else does. And it could go as wrong as the aQuantive acquisition. 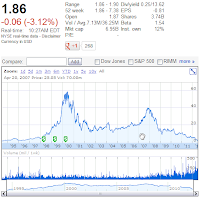 2012-07-16 = US Smartphone Market Share as of Q2 2012:
Nokia has 1.2% of the US Smartphone Market Share, being 0.9% Symbian and 0.3% Windows Phone 7, according to Nielsen's July 12th, 2012 report.
Perspectives are even worse than expected. Symbian is naturally losing market, as it was dumped in favour of Microsoft's Windows Phone 7. The major problem is that the Windows Phone managed as little as 1.3% market share, and both Samsung and HTC managed a better market share than Nokia. 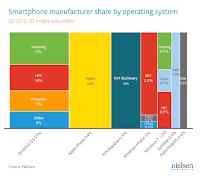 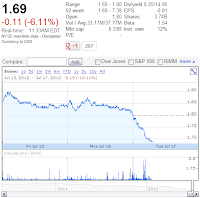