It's a fact: Apple Mac OS X is insecure... it allows people to install Microsoft software. 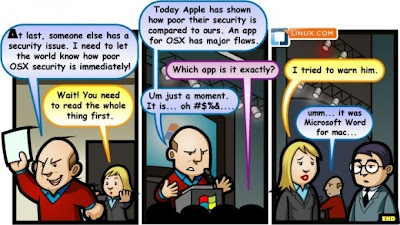 Who really invented the tablet...

Microsoft Surface will replace the iPad

Microsoft Surface uses a magnesium alloy for the casing and gorilla glass for the touch screen.
This will make MS Surface a serious candidate to replace the iPad... at least for this gentleman:

Microsoft Surface is yet to be launched, but already has three games:
Catch, fetch and debug.

I was looking to my latest post statistics, and this is what I got:

Where is the Internet Explorer? Is it dead?
Windows only at 49%?

I've been looking for all time statistics on my other blogs and sites, and it's tightly coupled with the content's subject and how it is being accessed.
Windows and Internet Explorer are mainly used by:


And are not (less) being used by:


If this is actually a trend everywhere, and not just on my contents, then Microsoft might be in a deeper trouble than I thought it to be.
Posted by GRAZEN at 21:22:00 No comments:

As Captain Obvious from NCIS pointed out:

- That's not Major Announcement, it's either Major Disappointment or Major Fail. We'll have to wait for the DNA results, just to be sure.

Judging from the refrigeration grille, I'd say it's Major Fail.
It's not a tablet, it's a tablet PC (remember those?).

Yes, I know there are two versions of Microsoft Surface. But let's face it, the only one that has an initial lead over the competition it the tablet PC version (Windows 8), because it can run existing applications. The tablet version (Windows RT) has no apps (well, you know I don't mean it has zero apps, just that they are nearly non-existent when compared with the competition iOS and Android). So, it will face the same market penetration problem that Windows Phone 7 is facing.

Microsoft, during the entire presentation, kept bashing Apple iPad. The problem is that Apple success is about design, and the Microsoft Surface appears to be designed by engineers, not by designers.
The stand is simply appalling. As someone said over the Internet, looks like a cheap digital photo frame. Besides, it has a major design fault: the tilt is fixed, you can't adjust it to face you, you'll have to adjust you to face it.

This have to do with the keyboard. The cover-keyboard (or keyboard-cover) is a mixed imitation from both iPad and Asus. Asus has the cover that doubles as a keyboard, and Apple has the magnetic one. Microsoft combined the ideas, and made a mess out of it. The Asus Eee Pad Transformer uses the keyboard as a stand, and this allows screen (tablet) tilt adjustment. Microsoft, with the magnetic cover, was unable to do this, and therefore needed the appalling stand on the back.

Back to the refrigeration grille. Microsoft said that this grille had an intelligent design, so you could never block it with your hands. This was clearly a reference to Apple iPhone antenna design problem. But Microsoft would have done better not to mention this grille.
The grille is a major issue. By making reference to the grille, we now know that the device heats to a point that it needs refrigeration. I've already addressed the autonomy problem, but there is more to it: comfort. Will the user be comfortable using it? Won't the heat make it uncomfortable to held and use?

As I said (Captain Obvious), we'll have to wait for the DNA results.
Time will tell.
But I'm betting that the corpse belongs to Major Fail.
Posted by GRAZEN at 13:10:00 No comments: