Nokia and Windows Phone: the demise 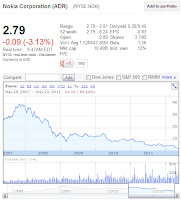 This demise was pretty obvious, even more than one year ago. The sudden drop on stock price, on the same day Elop announced the partnership between Nokia and Microsoft, was more than a subtle sign. The gains prior to that day also shows something else: investors were hoping that Nokia would go Android. They gambled on that, and lost. The next day everyone was aware of Nokia's future demise. The final days of Nokia are here.
Nokia's mistake: Elop.
Elop's mistake: Microsoft.
Microsoft's mistake: Ballmer.