Some time ago, McAfee deployed an update that identified a genuine Microsoft DLL as being an infected file. This rendered affected computers useless, until repaired.
But this was not enough, though.

Now I found out that the last update has changed:

Well... I do have a computer with a Portuguese version of Windows XP, but that's because I could not be able to buy one with the English version. All computers in Portugal come with pre-installed operating systems, and one is (was?) not able to choose the language. And as I did not wanted to invalidate the warranty, I did not change the OS. And once the warranty expired, I had too much contents to be able to change OS without a long time consuming backup and restore. Therefore, changing operating system is out of the question.

As I do prefer to have all my software in English, I bought McAfee Internet Security from Amazon UK.
Now I have the Portuguese version. Which is not what I paid for.
I've contacted the technical support, as they might be able to change the language back to English. No, they can't, it's linked to the OS language.
Now I'm stuck with something that I did not want, and that was the sole reason that made me buy the software from Amazon UK. Was it so complicated to ASK what language the user wants?

As if this was not enough, the Security Centre has changed... FOR WORSE!!!
I used the Advanced View on the previous Security Centre which gave me a pretty good image of what active or not, and that allowed me to tweak the system to work as I would like.
Now I'm stuck with an annoying useless microscopic non-resizeable window that shows me nothing, and that forces me to open/close multiple sections so I can understand what's on or off, and that makes me go through countless screens to get to where I want.
It really SUCKS!
It's the worse interface I've ever seen so far.

Even worse is the removal of the Backup & Restore.
Fortunately, I don't have any backups made with McAfee software.
If I did... they would be useless.

Now I'm in the market for a new anti-virus software, as McAfee no more. Ever.
Same for Norton. Ever.

Both are crappy software.
Norton has been crap for a long time.
McAfee I've been using for 10 years plus.
Now it's time for a change.

I still have almost an year of paid update for this crappy McAfee software. So I'll guess I won't remove it right now.
But once the updates expire, it's GOODBYE MCAFEE.
FOREVER!

If you can help me pointing out a good anti-virus software, feel free to do so.
Requirements:
Stupidity invaded McAfee, and was present at Norton for a very long time.
McAfee and Norton, the crappiest software ever. Yuck! 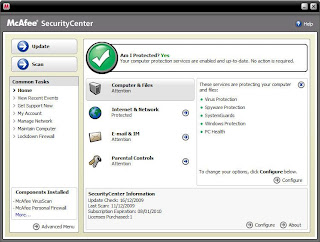 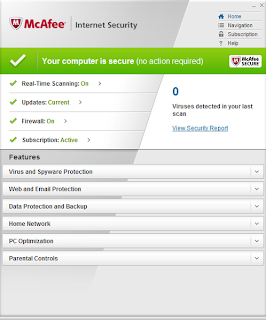 Impossible to follow. Countless open/close of screens, expand/collapse of sections.
And worse to me: in Portuguese. Portuguese language is not as brief as the English language, this means even less available information on screen at once (without scroll).
It really sucks. Big time.

Found what it seems to be an excellent alternative:
http://www.antivirusware.com/eset/nod32-antivirus/
The advanced configuration screen: 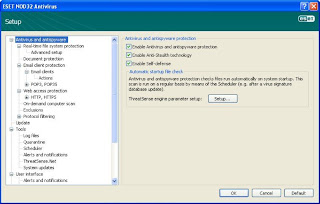